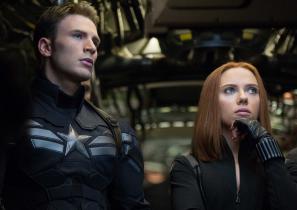 How much press is too much press? After Robert Downey Jr. walked out of an interview, Chris Evans and Jeremy Renner are in hot water for calling Scarlett Johansson (photos

Responding to a question about Black Widow being romantically involved with Mark Ruffalo's Bruce Banner aka The Hulk instead of their characters, Jeremy Renner (Hawkeye) and Chris Evans (Captain America) joked it was because Black Widow was promiscuous.

"She's a slut," replied Renner as Evans burst out laughing.

"I was going to say something along that line. She's a complete whore," Evans added.

"She has a prosthetic leg anyway," Renner smiled.

The actors were criticized for being misogynistic and making light of a disability at the same time.

The actors have issued an official apology for their "juvenile" jokes.

"Yesterday we were asked about the rumors that Black Widow wanted to be in a relationship with both Hawkeye and Captain America," Evans said in the statement. "We answered in a very juvenile and offensive way that rightfully angered some fans. I regret it and sincerely apologize."

"I am sorry that this tasteless joke about a fictional character offended anyone," Renner added. "It was not meant to be serious in any way. Just poking fun during an exhausting and tedious press tour."