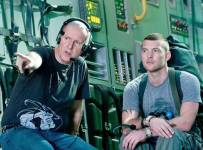 Federal officials are hoping 'Avatar' director James Cameron can come up with some ideas on how to stop the worst oil spill in US history.

Cameron was among a group of scientists and other experts who met Tuesday with officials from the Environmental Protection Agency for a brainstorming session on stopping the massive oil leak.

The Canadian-born Oscar winner, an ocean-technology buff, is considered an expert in underwater filming and manned submersible vehicles since his pioneering work camera work while filming 'The Abyss', 'Titanic' and a host of underwater documentaries.

Cameron attended the meeting with fellow Canadian Phil Nuytten, an underwater innovator and the head of North Vancouver-based Nuytco Research.

Nuytten is best known as the inventor of the Newtsuit, a hard suit that lets divers work at depths of up to 1,000 feet without having to go through decompression.

"This is not about undermining or finger-pointing at British Petroleum," says a Nuytco spokesperson. "Everybody's working hard and it's not for lack of trying that the leak hasn't been stopped. It's about looking at all the what-ifs – if this fails, if that fails, what happens."

"If the rock formation that holds the oil has been cracked or compromised in any way, that pressure is going to find another way to get out. And if it comes up through a crack or a seam, it could come up anywhere. And that's what they are trying to avoid."

With the failure of the 'top kill' mission to plug the leak with mud, BP has moved on to a plan that involves removing the crippled Deepwater Horizon drill rig and putting a cap over the cleanly cut pipe. That approach would help stem the flow of oil while the company drills two relief wells, but which won't be ready until August.