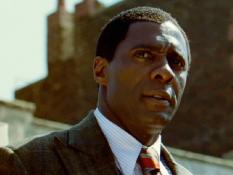 British author Anthony Horowitz is apologizing apologized after saying that actor Idris Elba was "too street" to play James Bond.

The 60-year-old author of the Alex Rader series of young adult spy novels, who also pens the newest James Bond novel, Trigger Mortis, made the comment when asked about Elba playing the next 007.

"For me, Idris Elba is a bit too rough to play the part. It's not a color issue," he said.

"I think he is probably a bit too 'street' for Bond. Is it a question of being suave? Yeah."

"Idris Elba is a terrific actor, but I can think of other black actors who would do it better."

Horowitz went on to name 'Hustle' star Adrian Lester as one of them.

The author apologized after the interview was published and generated backlash.

"I'm really sorry my comments about Idris Elba have caused offense," the author explained. "Clumsily, I chose the word 'street' as Elba's gritty portrayal of DCI John Luther was in my mind, but I admit it was a poor choice of word. I am mortified to have caused offense."