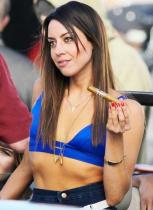 "We didn't plan out the scene so we didn't know how it was going to go down. So it was a lot of moments where Dan would call me over and he would be like 'In the next take, why don't you suck on his nipples? Try that," she says doing an impression of British director Dan Mazer.

"So we'd go and I'd try to do it. I'd try to get in there and he was like batting me away. And I didn't know if it was in character or not because you never know. And then they'd cut the camera. And then Dan called me back and would say 'Bob does not like his nipple are paid attention to so don't do that.'"

"So it was like 'Great, now he thinks I wanted to do that.'"