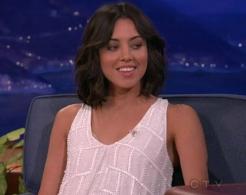 "There's a scene where you pleasure yourself. How do you approach that kind of scene," Conan O'Brien asked the star of the film. "That's got to be a strange thing to shoot on camera."

"Did you work with an elite core of masturbators before?," laughed Andy Richter.

"Well, I read it on the page and it said 'Brandy masturbates' and in my head I envisioned a nice scene where you just see my hand slowly go out of frame."

"Right, the frame stops and the rest is left to the imagination," added Conan.

"That's what I thought I was going into but when I showed up the camera was mounted on the ceiling, I was in my underwear in a Clinton T-shirt and there are bunch of old men smoking. You know, the crew guys."

"And then I went and then I touched myself. But I don't know, I thought I was doing one thing but when I showed up it was a whole different thing. It was a full body shot."

In the film, which hits theaters on July 26, feeling pressured to become more sexually experienced before she goes to college, Brandy Clark makes a list of things to accomplish before hitting campus in the fall.