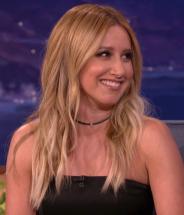 ) and Andy Richter talk about their Twitter exchange over bad parking.

Richter tried to shame Ashley Tisdale by sharing a photo of over parking job but it turns out co-star George Wendt was to blame.

"I was worried for a moment when I found out it was George's car but then I found out that the reason his car was in that spot was because she just parked in his spot," explained Richter.

"Ashley parks wherever Ashley wants to park, regardless of the names on the spot!"