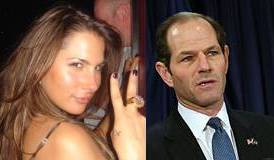 Itzler described how he first met Ashley while waiting in a hotel. He said he wanted to go on a date with her, and gave Ashley his card, hoping she wouldn't find out what he did for a living.

But he was shocked when she called back a couple of days later and said she wanted to "work for him" when she discovered he was a pimp.

When asked how popular Ashley was, Itzler said that she typically charged $2,000 per hour, with 3 to 4 hour minimums and was a "rock star" at what she did.