Ashlee Simpson: 'I Could Do Splits When I Was Pregnant' 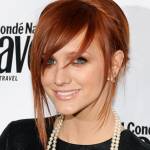 Ashlee Simpson says that even though it took some time to get used to the clothes she had to wear during her pregnancy, she was surprised to discover that she was still as flexible as ever.

In an interview set to air on Rachael Ray's daytime television show later this month, the singer-actress reveals: "I could do the splits when I was nine months pregnant. I could put my leg over my head still. I used to be a ballerina."

And despite starring in the new 'Melrose Place' spinoff, which premieres tonight on the CW, Ashlee says doesn't want Bronx "to grow up in the middle of Hollywood."

"Pete is definitely over protective, I know that! And I'm definitely going to be lay the boundaries down," she says. "It's different for a girl than with a guy, so I think we'll have to grow together but with Bronx, there will be a curfew and all that."

As for any upcoming makeout scenes on the show, the 24-year-old explains it's just work: "Pete is so not a jealous person, and it's work. So it is what it is but I'd rather be kissing my husband."

Simpson plays Violet, who is described as "shrewd small-town girl who moves to LA with a secret."