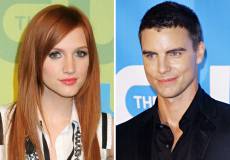 Ashlee Simpson-Wentz and Colin Egglesfield are moving out of 'Melrose Place.'

Their characters will make a final appearance on the CW drama in January. The network claims that the two weren't in the show's long term plans from the start, however, Egglesfield says that's not true and they were, in effect, fired.

Simpson's Violet and Egglesfield's Auggie have been part of a murder mystery involving Laura Leighton's Sydney, whose death was seen in the season premiere.

"We always knew that this murder mystery would end in episode 12," executive producer Todd Slavkin tells 'EW'. "And we always knew that Ashlee's character of Violet would be instrumental in that as a suspect, and Colin's Augie as well. And once that murder mystery was solved, she would go on her way. That was the original plan going into the development of the show."

"We felt that once the murder mystery was resolved, the tone of the show was going to shift into a much more fun, romantic, sexy upbeat kind of show, and her character would move on. Colin was always meant to be the ultimate suspect. And his brooding alcoholic tonally didn't fit the paradigm moving into post-murder mystery Melrose Place."

Egglesfield isn't buying that it was planned from the start, given he was signed on for beyond this season: "They said it was a network decision and obviously the ratings aren't what they need or want them to be, so they're going to try things to shake things up but why they chose this, I don't know."

"I was slated to be in 10 of the 13 first episodes, but I had a multiyear contract," he tells 'E!'. "I got the call this morning from our producers. They said it was a network decision, and they said the network thought Auggie was a little too dark, with his alcoholism. They felt like in the landscape of Melrose they wanted to change the tone of the show. So that's the explanation that they gave me."

"It's kind of crazy. It's like, How?! Why?! I'm not spending too much time thinking about it, because it'll just drive you crazy, if you try to figure something out that you're never going to figure out."

When asked if the move was a 'direct result' of the show's disappointing ratings (it's being seen by less than 2 million viewers), Slavkin says: "I understand that perspective. None of us foresaw the ratings. There’s nothing we can do about that. All we can do is write and produce the best show we know how."