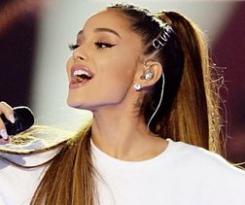 ) cried as she sang an emotional version of 'Somewhere Over the Rainbow' to close out her One Love Manchester benefit concert on Sunday.

During the star-studded concert, the singer was joined by Marcus Mumford, Miley Cyrus (photos

Grande spoke about meeting the mother of one of the victims, Olivia Campbell, who died in the attack.

The proceeds from One Love Manchester and its merchandise will go to the Red Cross' Manchester Emergency Fund, which has been set up to help victims of the attack and their families.

Those at the original concert were offered free tickets and additional tickets sold out in a record six minutes.