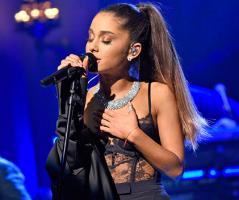 In a social media post, the 'Dangerous Woman' singer captioned a photo of herself by saying: "When you're cute but you're also the hardest working 23 year old human being on earth."

But even Ariana's fans thought the statement was a bit much.

"LOL humble too," joked one fan.

While another added "Good luck with the real world gf."

A third took offense: "Yes, Ariana Grande is the hardest working 23 year old on earth not the ones struggling making 60¢ a day trying to provide for their families."