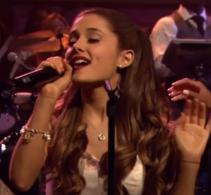 ) has spoken out after an apparent suicide bomber attack left 22 people killed and at least 50 others injured at her Manchester Arena concert in the UK on Monday night.

"Broken. From the bottom of my heart, I am so so sorry. I don't have words," Grande said on social media.

Chief Constable Ian Hopkins has told reporters the explosion occurred around 10:33 PM local time near the ticket office outside the arena.

"The attacker, I can confirm, died at the arena. We believe the attacker was carrying an improvised explosive device, which he detonated, causing this atrocity," Hopkins said. "We have been treating this as a terrorist incident and we believe, at this stage, the attack last night was conducted by one man. The priority is to establish whether he was acting alone or as part of a network."

While there has not been an official confirmation, the singer has reportedly suspended the rest of her The Dangerous Woman world tour indefinitely. She was set to perform in London on Thursday.

Video from inside the arena showed concertgoers screaming as they made their way out near the end of the concert.

EXPLOSION AT MANCHESTER ARENA AND EVERYONE RAN OUT SO SCARY pic.twitter.com/pJbUBoELtE

Police know the name of the attacker but have not released it.