Aretha Franklin Engaged To Longtime Friend But 'Not Pregnant' 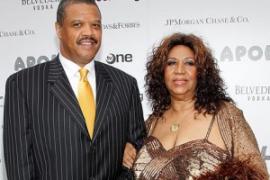 The 69-year-old singer joked in a statement that the move wasn't spurred by a surprise pregnancy.

"We're looking at June or July for our date and no, I'm not pregnant!," Franklin said.

The Grammy winner has been married twice previously. However, she has been single since 1984.

She was first married to Ted White for eight years before the two divorced in 1969. She then wed actor Glynn Turman in 1978, before divorcing in 1984.

She says they are planning to exchange vows in Miami Beach, Florida and celebrate the nuptials with friends and family during a reception on a private yacht.