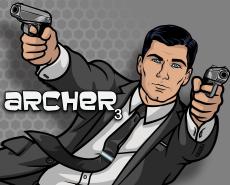 'Archer' has decided to abandon its 'ISIS' spy agency name after recent world events have given a different face to the acronym.

The FX series had been regularly using the name, which stood for International Secret Intelligence Service on the show. However, in light of recent events the show is dropping the name altogether to not be associated with the jihadist group.

"We were waiting for it to go away—at least I was," series creator Adam Reed tells the Daily Beast. "Back in Season 5, FX said, 'This might be a thing,' and I thought, 'Maybe it won't be? Maybe it'll be the mole that I'm gonna ignore and nothing will happen.'"

"We got sort of lucky and could organically make a merger with the CIA, so we went back and retroactively painted out the ISIS logos in parts of the show, and we just don't talk about it in dialogue."

"We won't say ISIS anymore, and the only visual representation of it will be that sign rolling off the show, "It's just the most awful thing, and we didn't want to have anything to do with it."