'Apprentice' Contestant Says Donald Trump Kissed Her But She Liked It 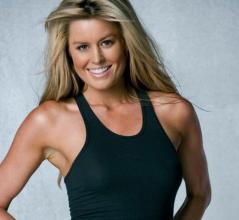 'Apprentice' contestant Jennifer Murphy has joined the women who claim that Donald Trump forced himself on them.

But the season four contestant, who claims Trump kissed her on the mouth, says she's still endorsing him for president because she "was OK with it."

The former Miss Oregon, who also competed in the Miss USA pageant, says: "I thought it was kind of cute and sweet, like he has this little crush."

)'s 'I Kissed a Girl' describing the experience.

"It's my way of saying, 'Cut the guy a break,!'" she says. "It could help get people’s attention and showcase how I do really feel about Donald Trump running for president."

In a message that closely resonates with the message of Trump's campaign, she says the GOP nominee is the agent for change.

However, Murphy is being criticized by some for not standing up for herself.

"Your page says that you 'produce entrepreneurial videos with an emphasis on empowering women', yet in this video you are saying it is ok to be sexually assaulted just because a man has power? Not empowering," says one woman. "Not ok."