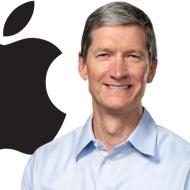 Apple CEO Tim Cook is responding to Donald Trump's suggestion that people should boycott the company's products over its refusal to hack an iPhone for the FBI.

Apple has refused to comply with an FBI order to unlock the iPhone of San Bernardino terrorist Syed Farook, saying creating such a software would not only unlock that phone but leave the phones of millions of iPhone users vulnerable.

"I use both iPhone & Samsung. If Apple doesn't give info to authorities on the terrorists I'll only be using Samsung until they give info," Trump said last month. "Boycott all Apple products until such time as Apple gives cellphone info to authorities regarding radical Islamic terrorist couple from California."

In an interview Time magazine, Tim Cook said: "I haven’t talked to Donald Trump so I don’t know what he thinks."

"The way I look at it is, Apple is this great American company that could have only happened here. And we see it as our responsibility to stand up on something like this and speak up for all these people that are thinking what we’re thinking but don't have the voice."

"I mean too many times in history has this happened, where the government over reached, did something that in retrospect somebody should have stood up and said ‘Stop,'" he explained.

"We see that this is our moment to stand up and say ‘Stop.' And force a dialogue. And that dialogue may, I don’t know how it’ll go. I’m optimistic. But I don’t know at the end of the day. But I see that as our role."

"I do think this is something that I think will affect the wellbeing of citizens of the US for decades to come, that will affect civil liberties for decades to come. To me this is a part of the foundation of what America is. Right to privacy is really important. You pull that brick out and another and pretty soon the house falls."

Seth Meyers took a closer look at the Apple vs FBI case as it broke last month on the 'Late Night'.