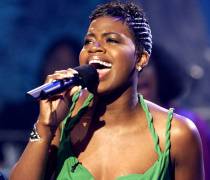 Antwaun Cook, the man who had an affair with Fantasia Barrino, is asking people not blame the singer for breaking up his marriage.

"Antwaun would be remiss not to address the criticism and judgment she has received," says Cook's lawyer, Nicole Sodoma.

"He knew Fantasia Barrino but the failure of his marriage can in no way be blamed on anyone except the two people that were a part of the union – Paula and Antwaun."

The statement comes a week after Fantasia was released from hospital following her suicide attempt with an overdose of aspirin and a sleep aid.

After initially denying she was involved with Cook, the 26-year-old season three 'American Idol' champ said she believed Cook and his wife were separated, and she was "heartbroken and is sorry for any pain she may have caused."

Fantasia admitted she had been dating Cook "off and on for 11 months."