Anthony Anderson: Trump Cheats At Golf, I'm Not Voting For 'The Black Guy' 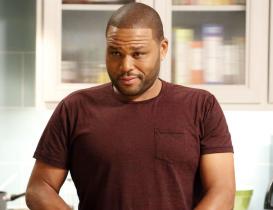 Anthony Anderson talks about playing golf with Donald Trump and says he's pretty sure he cheats.

"We golfed together at Trump's golf course. I don't know how somebody can say they're not a fan of Samuel L. Jackson," says Anderson, about Trunp's claim that he didn't even know the actor. "How can you get not be a fan?"

"Trump is a great golfer. I'm not going to say Trump cheats. His caddy cheats for him."

"But if, you know, you own the golf course, you're going to make sure the boss always has a great line."

"I didn't see Trump cheat because I was with him. But his ball was in the middle of the fairway," he recalls after what he thought was a disastrous hit by Trump.

"A lot of people said I and others in the African-American community only voted for Barack Obama because he was black. That theory doesn't hold any weight," he explains.

"Because I don't know any negro that's voting for Ben Carson. I mean his wife doesn't even vote for him."