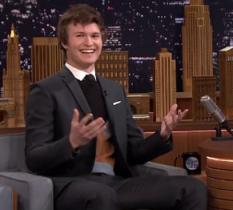 'The Fault in Our Stars' star Ansel Elgort tells Jimmy Fallon why he was rooting against 'Guardians of the Galaxy' from winning best visual effects at the Oscars.

"I looked at all the people who could've won and I'm freaking out," explains Elgort "And I said 'I really hope Guardians of the Galaxy doesn't win' because it's all four names I couldn't pronounce."

"I didn't want to pull a Travolta. I'd never be invited back. So I looked at who's supposed to win and supposedly the winner was going to be Interstellar. That was the favorite."

"I've never been so happy when someone won an Oscar. I was like 'Guys, your work was great and your names are even better.'"

Elgort also talked about walking the red carpet and attending Oscar parties with his mom -- who had no idea who Bruce Willis was.