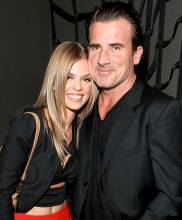 "We met doing a project and we connected over a conversation about how we were moving away from L.A.," she tells 'Us Weekly' of how she met the former 'Prison Break' star.

"I just bought a townhouse... We were trying to get away from all of it. We live far away, near the beach."

As for what they talk about, the '90210' star who previously dated Kellan Lutz says it runs the gamut.

"I'm like the little girl who loves school and love learning, especially from a man who is so intelligent and so worldly. It's nice to learn some things."