Anna Paquin Reveals She's Bisexual In 'Give a Damn' PSA 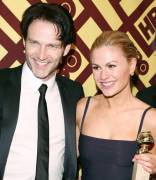 Anna Paquin, who is engaged to her 'True Blood' costar Stephen Moyer, has revealed she's bisexual.

"I'm Anna Paquin. I'm bisexual and I give a damn," Paquin announces in a new PSA for the 'Give a Damn' campaign, a project started by Cyndi Lauper's True Colors Fund, which aims to fight for gay, lesbian, bisexual and transgender equality.

"One hate crime is committed approximately every hour of every day in this country," she says.