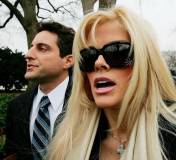 A jury has absolved Anna Nicole Smith's doctor of prescribing excessive drugs but convicted her boyfriend and a psychiatrist of conspiring to use fake names on prescriptions.

Howard K. Stern, who was described as Smith's manager, lawyer, lover and best friend, was convicted on two of nine counts for giving false names and acting by fraud to obtain prescriptions.

Dr. Khristine Eroshevich was convicted of conspiring with Stern on the fraud and false name allegations and was convicted on two separate counts of unlawfully prescribing and obtaining Vicodin through fraud.

Meanwhlie, Dr. Sandeep Kapoor, who prescribed sedatives and opiates to Smith, was acquitted of prescribing excessive drugs and prescribing to an addict.

"In other words, everything related to the appropriateness of the medication, I was acquitted of," Stern said in a statement after court.

"What the jury did find me guilty of, were two conspiracy counts limited exclusively to my name being used on medication for Anna. Now, this was done to protect Anna Nicole's privacy and it was nothing more than that."

His lawyer, Steve Sadow, said Stern didn't know it was illegal to use his name on the prescriptions.

"Both defendants are looking at possible maximum of at least three years in state prison," said DA spokeswoman Sandi Gibbons.

The 39-year-old Smith died of an accidental drug overdose in Florida in 2007, but the defendants were not charged in her death.