Anna Kendrick On Picking Double: 'I Don't Know What My Butt Looks Like' 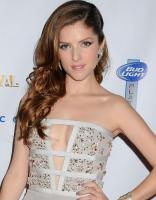 ) talks about her memoir 'Scrappy Little Nobody' and casting her own butt double while filming a recent movie.

"It was for 'Mike and Dave Need Wedding Dates' and it was this scene where you just kind of the half of a butt. I was like I don't know if I want to show half of my butt so I'll just get a butt double because I'm a big-timer now," explains Kendrick.

"And they bring you this folder of Polaroids of naked women. I felt so creepy. I felt like a serial killer."

Colbert asks if she compared it later by taking a photo of her own butt.

"You know, somehow, I think it would be a bad idea of me to take a picture of my butt. It suspect it would not be private."