Angelina Jolie Has Both Breasts Removed Over Breast Cancer Risk 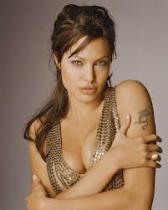 ) has had a preventive double mastectomy after learning she carried a gene that made it extremely likely she would get breast cancer.

The 37-year-old actress made the announcement in the form of an op-ed she wrote in Tuesday's New York Times with the headline "My Medical Choice."

She writes that she completed three months of surgical procedures to remove both breasts between February and April.

"My mother fought cancer for almost a decade and died at 56," Jolie writes. "She held out long enough to meet the first of her grandchildren and to hold them in her arms. But my other children will never have the chance to know her and experience how loving and gracious she was."

"They have asked if the same could happen to me. I have always told them not to worry, but the truth is I carry a 'faulty' gene, BRCA1, which sharply increases my risk of developing breast cancer and ovarian cancer."

"I wanted to write this to tell other women that the decision to have a mastectomy was not easy. But it is one I am very happy that I made," Jolie explains. "My chances of developing breast cancer have dropped from 87 percent to under 5 percent. I can tell my children that they don't need to fear they will lose me to breast cancer."

She says the process began with a procedure known as a "nipple delay, which rules out disease in the breast ducts behind the nipple and draws extra blood flow to the area. This causes some pain and a lot of bruising, but it increases the chance of saving the nipple."

The major surgery took place two weeks later where breast tissue was removed. Nine weeks later she had a third surgery to reconstruct the breasts and receive implants.

"I do not feel any less of a woman," Jolie writes. "I feel empowered that I made a strong choice that in no way diminishes my femininity."

Jolie says Brad Pitt was at the Pink Lotus Breast Center in Southern California for "every minute of the surgeries."