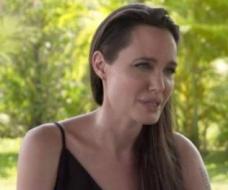 ) is defending the casting process for children to appear in her Khmer Rouge film 'First They Killed My Father'.

This after Vanity Fair reported that casting directors presented money to impoverished children and took it away from them as an acting exercise for the role.

The exercise was inspired by a real-life experience of Loung Ung, Jolie’s film is based on Ung’s 2000 memoir.

The actress and director is quoted in the article explaining: "Srey Moch (the girl chosen for the part) was the only child that stared at the money for a very, very long time. When she was forced to give it back, she became overwhelmed with emotion... When she was asked later what the money was for, she said her grandfather had died, and they didn't have enough money for a nice funeral."

However, following criticism of the casting process, Jolie says the audition was taken out of context and the money was never really offered to the impoverished children.

"Every measure was taken to ensure the safety, comfort and well-being of the children on the film starting from the auditions through production to the present. Parents, guardians, partner NGOs whose job it is to care for children, and medical doctors were always on hand everyday, to ensure everyone had all they needed. And above all to make sure that no one was in any way hurt by participating in the recreation of such a painful part of their country's history," she says in a statement.

"I am upset that a pretend exercise in an improvisation, from an actual scene in the film, has been written about as if it was a real scenario."

"The suggestion that real money was taken from a child during an audition is false and upsetting. I would be outraged myself if this had happened. The point of this film is to bring attention to the horrors children face in war, and to help fight to protect them."