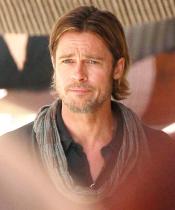 ) Pitt will continue to have sole custody of her six children with Brad Pitt according to a custody agreement.

Pitt had sought for joint custody of the former couple's children, who range in age from 8 to 15. However, Jolie has prevailed.

The agreement has been confirmed in a joint statement by a representative.

"We can confirm that childcare professionals have encouraged a legal agreement accepted and signed by both sides over a week ago. In accordance with this agreement, the six children will stay in their mother's custody, and the children will continue therapeutic visits with their father."

"This has been determined by childcare professionals to be in the children's best interest."

"We are not in a position to discuss the details," the representative explains. "We hope now that it is clear that the events which led to the dissolution filing involved minor children and their well being, there will be understanding of the sensitivity of the family situation."

"We believe that all sides are committed to healing the family and ask for your consideration during this difficult time."

Although courts in California generally favor awarding joint custody, Pitt was likely forced to reach a private agreement given the recent investigation over a mid-air altercation with son Maddox.

Pitt and Jolie were together for 12 years after becoming close while filming 'Mr. & Mrs. Smith' in 2005. Soon after their split became official, Pitt said he was concerned for the children.

"I am very saddened by this, but what matters most now is the wellbeing of our kids," he said. "I kindly ask the press to give them the space they deserve during this challenging time."