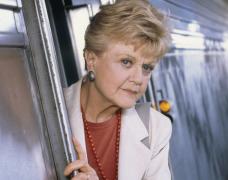 Angela Lansbury, who voiced Mrs. Potts in the animated film, sings her rendition of the theme song with composer Alan Menken on the piano for its 25th anniversary.

The 90-year-old actress surprised the crowd at a special screening in New York City, appearing on stage to sing the iconic film's song.

Disney is working on a live action of 'Beauty and the Beast', starring Emma Watson (photos