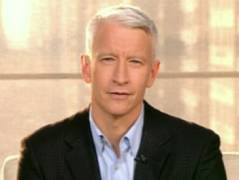 Anderson Cooper tells Stephen Colbert he learned a lot about his mom Gloria Vanderbilt while making the documentary 'Nothing Left Unsaid'.

Although he admits there was one thing he really would have preferred left unsaid.

"And she was like 'Oh, much better than him.' And then she just volunteered it was the first time she didn't have to fake an orgasm."

"Good to know. It's a visual I haven't been able to get out of my mind."

Colbert and Cooper began their chat by talking about the 'Late Show' host watching CNN with his nuts in hand.