Anderson Cooper Incredulous At How Much Snooki Is Earning (Video) 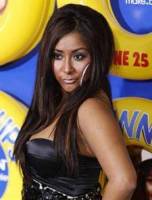 Yesterday we told you about Snooki and the rest of the 'Jersey Shore' cast's new contracts, which would pay each member of the core group $100,000 per episode.

Turns out we weren't the only ones ready to jump off a building at what the cast was earning. Anderson Cooper added those who pay Snooki to his RidicuList.

"Not sure if this is going to make you laugh or cry," said the CNN host. "Tonight we're adding a whole group of people to the RidicuList. I'm sure they're fine people, they've just lost their way a little bit."

"Tonight we're adding all the people who are paying Snooki to... be Snooki."

"Much like the laundry in GTL, there are loads of them. I'm telling you, Snooki is one impossibly lucky, unusually spunky, freakishly tanned, beer guzzling, juicehead hugging, muscle loving, pint-sized money making machine."

"We just learned that, taking a cue from her own hair, she is getting a huge raise. Snooki and her castmates will reportedly rake in -- grab some kleenex -- $100,000 per episode of 'Jersey Shore'. If you hear closely you can hear schoolteachers around the country weeping right now."

"That's about 2,857 tanning sessions... which is probably about what she needs per year."

Cooper went on to compare lines from Snooki's boob to that of Nobel-winning novelist Toni Morrison, who will be paid less than Snooki was to speak at Rutgers.