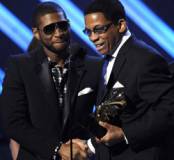 But in what could be called the surprise of the night, Album of the Year honors went to Herbie Hancock's 'River: The Joni Letters'.

Winehouse, who was unable to get a visa to be at the awards due to her legal and drug problems, performed ''I'm No Good'' and ''Rehab'' via satellite from London.

While West, who had the most nominations (eight), picked up four trophies himself: Best Rap Solo Performance, Best Rap Performance by a Duo or Group, Best Rap Song, and Best Rap Album.

Check out the complete list of winners for the most popular categories below:

Album of the Year: "River: The Joni Letters," Herbie Hancock.

Pop Performance by a Duo or Group With Vocals: "Makes Me Wonder," Maroon 5.

Rock Performance by a Duo or Group With Vocals: "Icky Thump," The White Stripes.

Rock Instrumental Performance: "Once Upon a Time in The West," Bruce Springsteen.

Country Performance by a Duo or Group With Vocals: "How Long," Eagles.

Contemporary R&B Album: "Because of You," Ne-Yo.

Electronic/Dance Album: "We Are the Night," The Chemical Brothers.

Musical Album for Children: "A Green and Red Christmas," The Muppets.

Song Written for Motion Picture, Television or Other Visual Media: "Love You I Do (From Dreamgirls)," Siedah Garrett & Henry Krieger, songwriters (Jennifer Hudson).