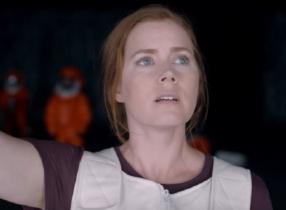 A new extended 'Arrival' trailer is delivering on the promise of alien contact from the first trailer.

The sci-fi drama unfolds when mysterious spacecrafts touch down across the globe. An elite team - lead by expert linguist Louise Banks (Amy Adams) - is brought together to investigate. As mankind teeters on the verge of global war, Banks and the team race against time for answers.

Adams teased earlier this year that "this happens in our world today, as it exists. Not having to transport myself to a universe where superheroes exist, which is also fun, really helped me ground the character and the experience."