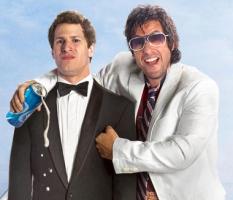 A group of American Indian actors has walked off the New Mexico set of Adam Sandler's movie after complaining about offensive names and stereotypes.

At least ten actors have quit the production of the satirical Western 'The Ridiculous Six' after producers ignored their complaints about disrespect to their culture and religious practices.

One actor says the film's script includes several offensive names for Native American female characters and a scene that has a Native American woman urinating while smoking a peace pipe.

The group says they were told to leave if they felt the film was offensive because the script wasn't going to be changed.

Netflix, which is producing the movie with Sandler, says that the film isn't one to be taken seriously.

"The movie has 'ridiculous' in the title for a reason: because it is ridiculous," it says.

"It is a broad satire of Western movies and the stereotypes they popularized, featuring a diverse cast that is not only part of - but in on - the joke."