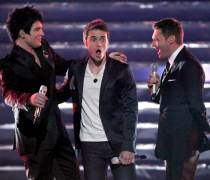 "We have never, nor would we ever, use Auto-Tuning during the American Idol competition," producers for the Fox reality series say in a statement as they vowed to avoid the use of electronic pitch correction.

The credibility of all singing competitions has been put under the microscope after fans in the UK noticed that contestant's pitch and off-key notes had been corrected on 'The X-Factor' and called out producers for misleading the viewers.

"It’s as bad as rigging the phone lines for voting," Labour MP Tom Watson blasted the program as the outrage grew in the country.

Producers said that changes weren't made to affect the outcome of the show but rather "to deliver the most entertaining experience possible for viewers."

"The judges make their decisions at the auditions stage based on what they hear on the day, live in the arena," said a spokesman for the ITV talent show.

But British media outlets are blasting producers and especially Simon Cowell, who is the face of the program. His photo was featured on the front of Britain's Daily Mirror on Monday, under the caption: "X Faker."

As for other 'American Idol' issues, Fox's statement didn't address who would replace Cowell and Ellen DeGeneres. Steven Tyler and Jennifer Lopez (photos

) are the reported front-runners for the judge's table, which begins its work sometime after Labor Day.