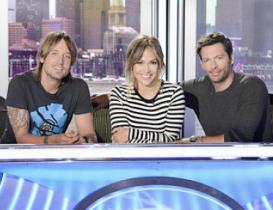 'American Idol' airs its series finale this week but that won't be the end of it if creator Simon Fuller has his way.

Fuller says despite running for 15 seasons he plans on reinventing the cancelled show once again to bring it back from the dead.

"There will no doubt be another format or refinement or elevation of the format," Fuller tells THR.

"Now I can actually revamp it and come up with a new version. And we can look back on 15 seasons and think of some legitimate ways to allow people to enjoy them again, maybe adding another dimension to it."

"My head is exploding with opportunities. The next generation of Idol -- and Idol will certainly be coming back for sure -- will have a youthful glow and it will be pioneering again, just as it was when we first began."

"The overriding emotion is pride. It's been an amazing 15 years and it's the first time ever that I've been able to look back and think, wow, that was pretty good. We made our mark; we made history," he admits. "It's exceeded all expectations."