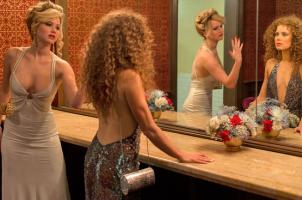 '12 Years a Slave' concluded the night as best film drama despite missing out in all the other categories it was nominated in. Both 'Hustle' and '12 Years' had received seven nominations coming into the night.

On the television side, 'Breaking Bad' finally won best drama for its record breaking final season and Bryan Cranston took home the best actor in a drama series honor.

'Brooklyn Nine-Nine' managed to surprise twice with wins for both best comedy and best actor in a comedy for star Andy Samberg. Meanwhile, host Amy Poehler won for best actress in a musical or comedy with ''Parks and Recreation'.

Catch the best jokes and highlights or see the complete list of winners below:

Best Actor in a Musical or Comedy
Leonardo DiCaprio, The Wolf of Wall Street

Best Actress in a Drama
Robin Wright, House of Cards

Best Actress in a Musical or Comedy
Amy Poehler, Parks and Recreation

Best Miniseries or Movie
Behind the Candelabra

Best Actress in a Miniseries or Movie
Elisabeth Moss, Top of the Lake

Best Actor in a Miniseries or Movie
Michael Douglas, Behind the Candelabra

Best Supporting Actress in a Series, Miniseries or Movie
Jacqueline Bisset, Dancing on the Edge