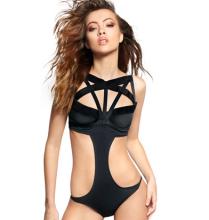 Mirjana Puhar, who competed on the last season of 'American's Next Top Model', was killed this week in a triple homicide.

A 19-year-old named Emmanual Jesus Rangel has been charged with the murders of Puhar, her boyfriend Jonathan Cosme Alvarado, and his roommate Jusmar Isiah Gonzaga-Garcia.

Police have only begun the investigation but believe it was drug related, after finding money scattered around the house.

Mirjana Puhar competed on the 21st season of 'Top Model' last year. She was eliminated from the show in the 10th episode.

"We are deeply saddened to learn of the tragic news about Mirjana Puhar," says executive producer Tyra Banks in a statement. "She was a vivacious and promising young woman."

Finalist Adam Smith also remembered her on social media and wrote: "Everyone please keep Mirjana and her family in your thoughts and prayers. We love you dearly, and you will live on in our memories."

"Our cast lost a family member today. I still cannot comprehend that you are no longer with us, I can vividly see you laughing and hear your voice as if it were yesterday."