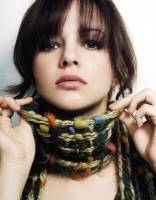 Amber Tamblyn has been cast to play Charlie Harper's long-lost daughter on 'Two and a Half Men'.

Producers had been looking for an actress to join the series who was in her late teens or early 20s. However, after meeting with the 30-year-old 'House' actress, they believed she was the right woman for the job.

Tamblyn's bisexual character will appear in at least five episodes this season, to fill the void left by Angus T. Jones' Jake, after she first arrives on Walden Schmidt's doorstep in the season premiere looking for her biological father.

She will be the daughter Charlie Harper, Charlie Sheen's character before he was fired from the show in 2011, never knew he had.

Tamblyn is also best known for starring in 'Joan of Arcadia', '127 Hours' and 'The Sisterhood of the Traveling Pants'.

'Two and a Half Men's eleventh season will premiere on Thursday, September 26.