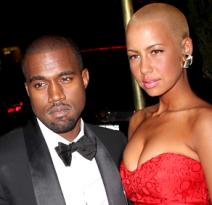 Amber Rose called Kanye West a "f--king clown" the day after the rapper's feud with her ex-husband, Wiz Khalifa.

In West's tirade, he mentioned Rose's past as a stripper and said she had trapped Khalifa by having a child.

"You let a stripper trap you," West said of the woman he had also previously dated. "I know you mad every time you look at your child that this girl got you for 18 years."

"I would never talk about kids in an argument," Rose said. "It just shows the type of person he is."

"Even him saying stuff about my son, I still didn't say anything about his kids. I'm not going to. This is ridiculous. They're innocent babies. You don't ever, ever talk about a baby, ever. That just shows how f--king ridiculous he is."

She said she wasn't surprised by West's reaction "because I know him."

"We dated for, like, two years! But you're talking s--t about Wiz and my baby."