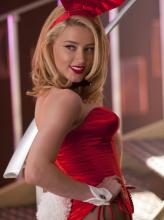 ) has filed for divorce from Johnny Depp after just over a year of marriage.

She listed their date of separation as this past Sunday and is seeking spousal support from the Oscar-nominated actor.

Depp and Heard met while co-starring in the 2011 film 'The Rum Diary'. Despite having a 22-year age difference, they tied the knot twice in February 2015.

The couple were most recently seen together in the now infamous apology video for smuggling their dogs into Australia. Heard plead guilty to falsifying documents to conceal the pets when she arrived by private jet to join her husband on the set of the fifth 'Pirates of the Caribbean'.

Depp was previously married to Lori Anne Allison between 1983 and 1985. Before Heard, he was in a relationship with Vanessa Paradis for more than a decade but they never married.

The timing of the divorce filing is curious since Depp's new film 'Alice Through the Looking Glass' is set for release tomorrow.