Amber Heard's Ex-Girlfriend Speaks Out About Past Domestic Violence Arrest 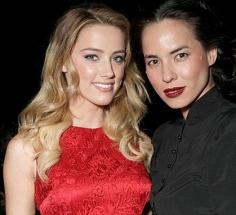 With the revelation that Amber Heard (photos

) was arrested in 2009 after she and her then-girlfriend, Tasya van Ree, had an argument, her ex his speaking out.

Heard is in the midst of a divorce from Johnny Depp. She claims she suffered through "years of physical and psychological abuse" at the hands of the actor.

The 30-year-old actress was arrested for misdemeanor domestic violence in the 2009 incident after she allegedly struck Ree at the Seattle-Tacoma International airport.

"In 2009, Amber was wrongfully accused for an incident that was misinterpreted and over-sensationalized by two individuals in a powerful position," Ree says in a statement.

"I recount hints of misogynistic attitudes toward us which alter appeared to be homophobic when they found out we were domestic partners and not just 'friends'. Charges were quickly dropped and she was released moments later."

"It's disheartening that Amber's integrity and story are being questioned yet again. Amber is a brilliant, honest and beautiful woman and I have the utmost respect for her. We shared 5 wonderful years together and remain close to this day."

Heard currently has a domestic violence restraining order against Depp.