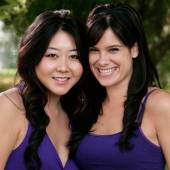 After a string of near eliminations, the lucky streak finally came to an end for professional poker players Maria Ho and Tiffany Michelle in the Netherlands.

But the two are calling the final challenge that knocked them out 'physically unfair' since they were an all-female team.

Teams could choose between 'Farmer's Game' and 'Farmer's Dance' at the detour. The first resembled a game of golf with balls the size of cantaloupes over a large grassy field, which you had to complete in eight strokes or less, after swimming through cold water in long johns to get there.

While Farmer's Dance required teams to ring a bell with a mallet, then learn and perform a traditional Dutch folk dance, and eat a herring to cap it off.

Maria and Tiffany couldn't hit the balls far enough or ring the bell hard enough to get into the dance despite more than seventy combined attempts. They eventually resigned from the race being unable to accomplish either task after several hours, without knowledge that they were already eliminated.

"We didn't come into this thinking we would be the physically strongest team, but we also didn't think we would be faced with something that we just couldn't do because we lacked brute strength, Maria tells 'People'. "We were forced to throw our hands up in defeat. It was a very hard situation."

"We would have been able to get the dance and we would have eaten the herring, but that carnival bell dinger added an element that was physically unfair. It was heartbreaking."

"It was not regular golf. And you have to add in the other elements like weather and the fact that we were freezing from swimming. There were literally 30-mile-an-hour winds blowing in the opposite direction of where we had to hit the ball. I don't want to make excuses but we gave everything we had and we still couldn't complete either one."

"It was so much worse than it looked. That mallet was over forty pounds," adds Tiffany. "Just lifting it over your head was a task. We were exhausted from going back and forth. We were uncomfortable in wet long johns. I'm a push-through, do-anything girl, but I hit a wall and needed to hug it out."

As for lying about their occupations, Tiffany explains it wasn't totally made up.

"We thought the best strategy would be to highlight something else in our lives as our careers. I'm very involved with the Los Angeles Youth Network, which helps homeless youth, so it wasn't a lie. You need allies and we thought it would endear people to us."

"We were a little more prepared for the negative comments because we have a public image since we have dealt with trash talkers. Anyone who knows us knows we’re good people."