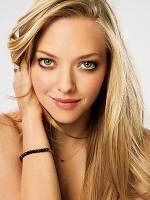 "It's going to be very risque," Patrick Muldoon, a producer at the Lovelace production company behind the film tells E! News.

"It's a new thing for her, but it's not about nudity," he says. "It's profound, the performance that she's giving... She's doing such an amazing job."

"We're about two weeks into filming, and the movie's going to be incredible."

In addition to the 26-year-old Seyfried, Demi Moore will play feminist icon Gloria Steinem in 'Lovelace'.

Linda Lovelace rose to fame for her role in the enormously 'Deep Throat'. But she later denounced her pornography career, claiming that she had been forced into it by her first husband and became a spokeswoman for the anti-pornography movement.