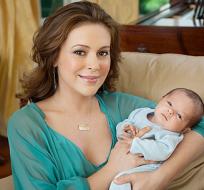 ) was not a happy traveler after Heathrow Airport took away her pumped breast milk.

"Heathrow Airport just took my pumped breast milk away. 10 ounces. Gone. Not okay," she began by telling her fans on social media.

Told by the airport that breast milk was treated like any other liquids and had to follow the 100ml rule, Milano said: "I would have happily spread milk in different containers (which I travel with) to comply to those liquid rules."

"Instead, milk was taken away with no discussion. Shampoos, lotions, etcetera were simply tested and handed back with no issue. Makes no sense at all."

"Why can you test my toiletries to make sure they are safe but you have to throw away my breast milk?"

The actress, who has a 7-month-old daughter, despite her trouble with security she still technically carried on more liquid than allowed.

"Another reason it makes no sense - when I got past security it was time to pump again so... I did carry on 5 ounces of breast milk."

"Every ounce of milk I'm able to produce for my child is nothing short of a miracle and to watch that milk be thrown away without any regard for my baby, was heartbreaking."

"It's not the fault of the security in the airport; they're following orders to keep us all safe," she later said. "But I do I feel it is a policy that needs thoughtful reconsideration."