Alyson Hannigan On Speculation: "I'm Not Pregnant... Just Ate Too Much" 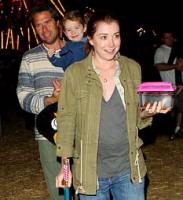 Alyson Hannigan wants to put an end to speculation that she's pregnant.

After being spotted at the Malibu Chili Cook Off and carnival, with what appeared to be a bump, the 'How I Met Your Mother Star' says she wasn't hiding anything under her loose fitting top.

"I just ate too much carnival food, that time of the month, hurt my back and couldn't suck my gut in... and need to do cardio!"

"And I'm never gonna wear that shirt again!," she quipped. "I do look pregnant in that photo!"

But at least the evening wasn't a complete disaster. Hannigan's 2-year-old daughter won a goldfish.

"The carnival was really fun! And Sati won a goldfish on her second try! Put my ping pong throwing skills to shame."