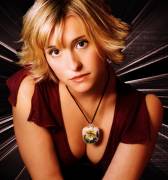 A day after 'Smallville' star Tom Welling revealed that the show's tenth season will be its last, Allison Mack has announced that she doesn't plan to return next year.

"It’s amazing to think that Chloe Sullivan and I have been one in the same for over a third of my life," Mack says in a statement.

"I'm truly humbled by the love and loyalty of all the fans whose enthusiasm has carried me — along with a cast and crew which has become my second family — over the past 9 and a half years."

But thankfully it's not the last we've seen of Chloe.

"I'm coming back for several episodes next season to tie up Chloe's Smallville legacy properly," she admits. "It’s been a life-changing ride and I look forward to what lies ahead with the strength of a superhero as my foundation."

Meanwhile, Welling's revelation that next season would be 'Smallville's last doesn't come as a huge surprise since the inevitability had been rumored for a few seasons now. While the show is by no means struggling in the ratings, the actor has previously hinted that he wants to leave the longrunning series sooner rather than later.

'Smallville' is one of the few shows, alongwith 'Supernatural' and 'One Tree Hill', that is left over from the network's days as the WB.

The CW has already renewed 'Gossip Girl', '90210', 'Vampire Diaries', 'Supernatural', 'One Tree Hill', 'Life Unexpected' and 'America's Next Top Model' for another season.