Allison Janney Talks About Absurdity Of Nudity Contracts For Scenes 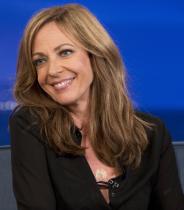 In a chat with Conan O'Brien last night, Allison Janney talked about the absurdity of nudity contracts after she discovered how elaborate and detailed they were.

Janney also talked about starring on 'Masters of Sex' -- a show which her mother refuses to even say the name of and the drama for which she filmed the nudity in question (uncensored link).

"It's quite extensive and a little scary," she said. "I mean it gets down to Allison Janney will only show left side boob, not right side boob. Ass can be shot from above but not down low."

"I was talking with my lawyer about this!," she laughed.

"I know, I want to know what's wrong with your left side boob now," quipped Andy Richter. "I love that stuff!"