Alison Brie: I Was Asked To Take Off Top For 'Entourage' Audition 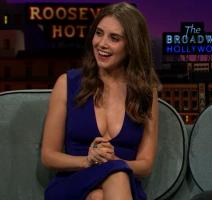 After a screening of new series, GLOW, at the ATX Television Festival in Austin, Alison Brie (photos

) was asked if she thought Hollywood had progressed since the 1980s, when her series is set.

"I auditioned for three lines on an episode of Entourage that I had to go on in a bikini or like shorts and the tiniest shorts," she explained. " And they were like, 'Ok, can you take your top off now?'"

But at least Brie was prepared.

"I had a bikini top on under my top," she said. "They didn't ask me to get totally topless. Sorry to disappoint you!"

The actress also revealed she had auditioned for Marvel Studios several times.

"I've gone through auditions for Marvel movies and auditioned a million times for roles with three lines and you are begging for them," she said. "And I'd be glad to get them! It's brutal, it just is."