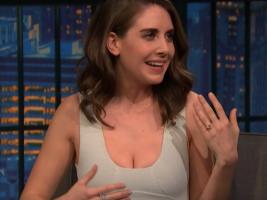 ) tells Seth Meyers a story that ends with her accidentally peeing on her vintage 'Mad Men' underwear.

Being the trooper she is, Brie says she still went on to a film the scene before being consoled by the costume designer that "it happens more often than you think."

"You're really working blind," Brie explained. "You're lifting up the skirts, and the girdles are made so you can sort of pull it to the side and use the bathroom. They thought of everything!"

"Except that I had a pair of underwear underneath, and I just start peeing, and I can't hear the pee hitting the toilet, so I realized I missed my underwear, they didn't quite make it out of the way. I just got soaked. Someone outside was like, 'We have to go!' So I went to set and shot a full scene."