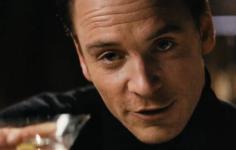 They say no one can hear you scream in space but there's plenty of screams in the first trailer for 'Alien: Covenant'.

Ridley Scott returns to the universe he created with a new chapter in his the 'Alien' franchise.

The crew of the colony ship Covenant, bound for a remote planet on the far side of the galaxy, discovers what they think is an uncharted paradise, but is actually a dark, dangerous world.

Watch the red band trailer, with some less than sanitary language, below.