Alicia Vikander Can Lift Her Own Weight After 'Tomb Raider' Training 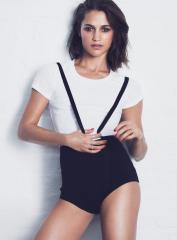 Vikander, 28, tells Elle that she started by "bulking up quite a lot a first, and then trying to just, like, tone down."

"I've never been able to lift my own weight, and the day when you have that capacity, it's pretty empowering!" Vikander says.

"I've never done action scenes on this level — not even close. It feels like I'm back to dancing — the training, the intensity. You need to be aware of your movement up in the wires and how your body works."

Vikander will play Lara Croft, taking over on the big screen from Angelina Jolie (photos

"She set a whole tone for that kind of role, so I knew we had to do something very different."